SACLC has successfully completed a fundraiser in the form of a bicycling challenge that lasted for the month of September.

The plan was to have as many members of our club get on their bikes as possible. However, only our President Tom decided to go through with the challenge. To be fair, it was a ‘spur of the moment’ decision for Tom in mid-August to undertake the challenge during September, so it might have been a bit of a big ask to convince other people to join him at such short notice. Nevertheless, Tom thought it would be a worthwhile endeavour to pursue. After all, bike riding is, by and large, a COVID-safe activity and we as a club need to be finding new and creative ways to fundraise. Also, he really likes bike riding!

A goal of 1000km over a period of 30 days starting from the 1st of September – an average of about 33km per day – was reached… in 29 days! But it wasn’t without its pitfalls…

On day 9 of the Challenge, having ridden 461km, and en-route to the Lions Club of Berowra’s sausage sizzle event, Tom was attempting to climb a particularly steep hill in Turramurra, where thanks to a bit of over-eagerness, he broke the chain, hanger and derailleur on his hybrid bike. He had no choice but to temporarily pause his challenge, walk to Turramurra railway station and take the train the rest of the way. The triumphant ride into Berowra Shopping Centre was not to be. He did end up having some very nice sausages prepared by some very nice Lions 🙂 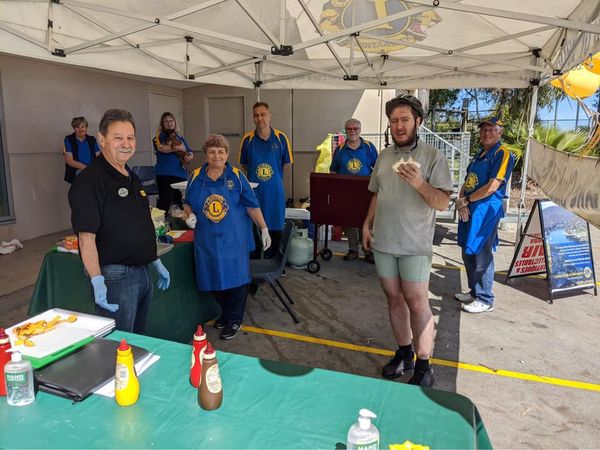 Later that day, Tom took his bike to his local bike shop where he was told that it would take an indeterminate amount of time to fix. This was not good news for Tom. Since he did not have another spare bike to continue the challenge with, there was the very real possibility that he would not be able to complete the challenge in the promised time. Tom had no choice but to wait and hope for the best.

And to continue to promote the challenge and his club.

While waiting for the bike to be fixed, Tom visited the Lions Club of Coogee during their regular monthly meeting, where he was invited to address the club membership. Despite having lifelong issues with his ability to speak, on account of being Autistic himself, Tom nevertheless somehow managed to give an impromptu speech about his club that was well-received. Perhaps he is better at public speaking than he gives himself credit for!

On the 21st day of the Challenge, some good news came from the bike shop. The bike was fixed and Tom could continue with his riding. However, with 539km to ride and just 10 days remaining, Tom had a lot of time and distance to make up for. The Challenge had, well and truly, become a challenge!

Nevertheless, Tom had a plan. During the week, he would ride three times a day – before work, during lunchtime and after work. During the weekend, he would go for not one, but two epic rides of 100km each. Instead of doing 100km in a single session, however, Tom rode four circuits of 25km each from his home, taking breaks between each set.

The double century rides were rather helpful in putting Tom back on track to complete the Challenge, so much so that he ended up finishing 1000km a whole day early!

We give special thanks to everyone who has donated so far. At the time of publishing this post, we have raised $822. However, we are still waiting on a few more pledges to come through, meaning that we will likely smash our fundraising target of $1000, which would be an amazing outcome 🙂