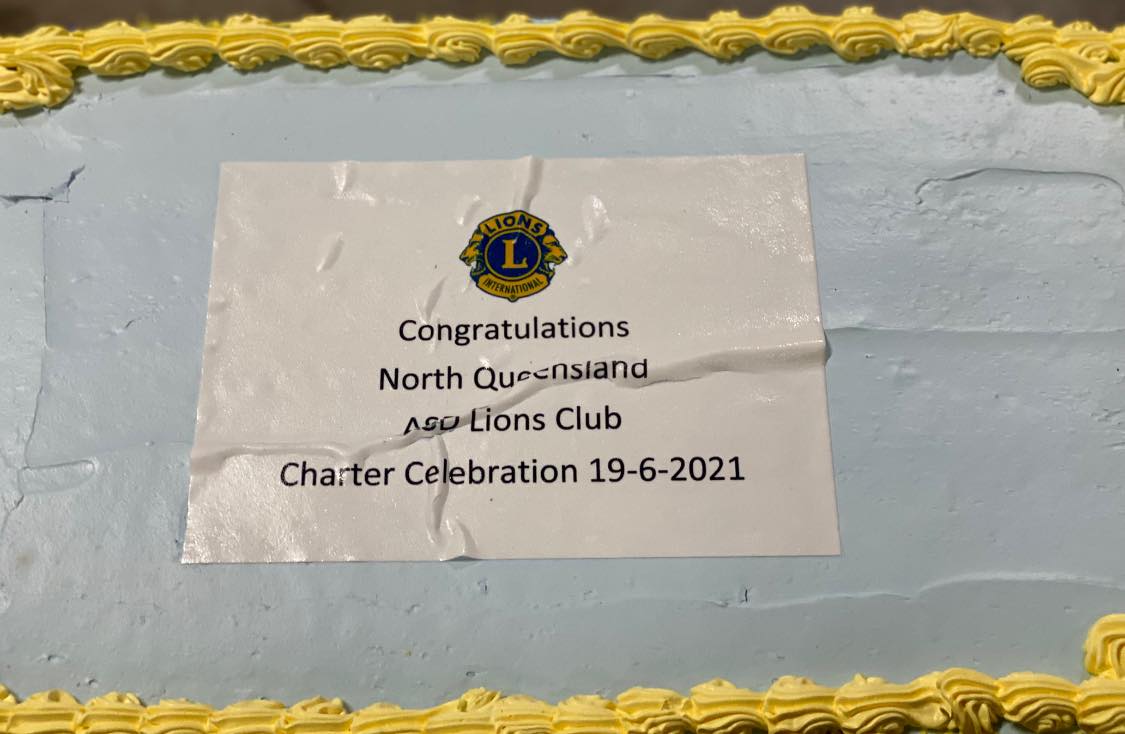 The Autism Lions Movement in Australia continues unabated with the addition of the third club in the Movement, the North Queensland ASD Lions Club!

As with Melbourne Autism’s charter night, it was only proper that we showed our support for this equally momentous occasion, so once again, we sent our president Tom up north to transplendent Townsville to join in on the festivities.

NQASD’s Charter Dinner was held at the Lions Den of their sponsoring Lions Club, Townsville Castle Hill, which is a dedicated club facility that only a handful of Lions Clubs worldwide are fortunate enough to have, and which the members of the newly minted club can avail themselves of.

This Charter Night was very well attended, with representatives from all over Lions District 201Q2 (including District Governor Audrey Kenny), as well as a representative from Townsville City Council, all showing their support.

Dinner was a simple, yet satisfying affair, consisting of a barbecue with salads, ice-cream and the all-important celebratory Charter Cake for dessert.

There were speeches aplenty, with addresses from a number of people including Charter President Linda and Councillor Maurie Soares.

Tom was also invited – unplanned – to address the audience. In anticipation of this, Tom wrote his speech on the plane en route to Townsville earlier that day. In his well-received, passionate display of questionable oratory, Tom spoke of the history and future of the Autism Lions Movement, openly questioned NQASD’s choice of the letters “ASD” in their name, and challenged everyone to think of “ASD” not as “Autism Spectrum Disorder”, but as Autism Spectrum DIFFERENCE.

Read a transcript of the speech

Following the speeches, there was of course the usual pomp and ceremony of presenting the nascent Club with its paraphernalia as well as the induction of all 22 Charter Members. Well, it would have been 22, were it not for the fact that not only were the dinner guests invited to join NQASD right there and then, but two people actually took up the offer! So, in fact, 24 Charter Members of NQASD were inducted. Who knew you could do that!?

The evening was rounded off with a good old-fashioned Lions raffle!

Once again it was a honour to have been a part of the birth of the third — but not the last! — Autism Lions Club as well as to meet all of the truly beautiful people that make up its membership. We look forward to working closely together in improving the lives of all autistickind with our service projects!

It would be remiss to not accord special thanks to Past District Governor John Muller OAM, who not only served as Master of Ceremonies at the Charter Night (and played the guitar!), but personally chauffer-drove Tom to and from the airport, his hotel and the Den. AND gave Tom a whirlwind guided tour of Townsville. AND paid for his Charter Dinner as well. AND invited him to brunch with NQASD members on The Strand the next day. John is a model Lion, citizen and gentleman — and all Lions should aspire to be just like him!